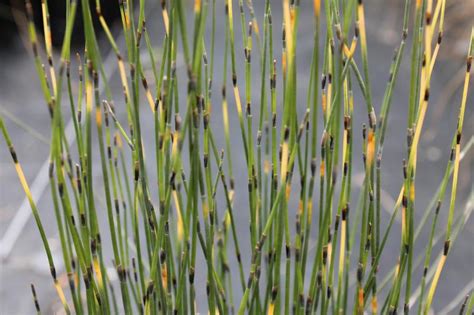 Apodasmia similes is a bluish-green native rush with dark bands along the stem of the leaves and is endemic to New Zealand.

Apodasmia similes is a bluish-green native rush with dark bands alongthe stem of the leaves and is endemic to New Zealand. It is one of dominantplants that grow along the edges of tidal rivers and lakes and on damp flats insand dunes It is found throughout New Zealand on the edges of tidal rivers andlakes and on damp flats in sand, it is also found around peat bogs and hotsprings.
Apodasmia similes slowly spreads from a creeping rhizome and forms dense rushlandsup to 1.5 metres tall. It is dioecious- having male and female flowers onseparate plants.
It flowers from October to December and bears fruit from December to March. Apodasmiasimilis is often found growing with Juncus maritimus (sea rush). The easiestway to identify Apodasmia similis is by the dark bands along the stem that givethe stem a slight zigzag appearance. Juncus maritimus (Sea rush) is greenwhereas the colour of oioi varies from dull green to deep orange to a purplishcolour. Apodasmia similis is an important plant for our native fish because itprovides good inanga (whitebait) spawning habitat. The Maori name Oioimeans  'to shake gently', which is a reference to the swaying of the stemsin the wind. Apodasmia similis was used by Māori for thatching the outsides oftheir houses. It was by far the best of all the rushes and sedges forthatching, on account of its durability' (Colenso 1869)